Satellites, dynamite and more – 7 ways to save the ocean from illegal fishing

FOR too long, an international fleet of illegal fishing vessels has worked to systematically plunder the ocean.

Every day, thousands of ships sail over the horizon into unmonitored waters. Once out of sight, they fish anywhere and everywhere with complete impunity, decimating ecosystems and the economic fortunes of law-abiding fishermen. On the lawless expanse of the high seas, these pirate fishermen rule supreme.

Their potential transgressions are many. Pirates fish illegally inside marine protected areas (MPAs), where fishing is banned. They fish without limit in international waters, where sparse regulations fail to protect marine life such as tuna, swordfish, and sharks from overfishing. They fail to report their illegal catch when they come ashore, and often mislabel it with the wrong species name, a form of seafood fraud.

These illicit activities are examples of illegal, unreported, and unregulated fishing, referred to in shorthand as IUU fishing. 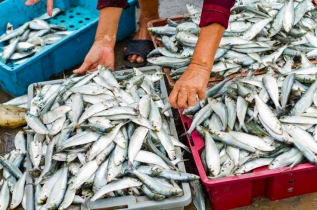 Because it is unregulated, IUU fishing can easily lead to bycatch and overfishing. Illegal fishing vessels often target economically valuable species, including ecologically important carnivores such as sharks and tuna, and can cause lasting damage to marine food webs. The damage to some species has already been severe: five of the eight species of tuna are threatened with extinction.

In addition to being ecologically harmful, IUU fishing is also pervasive. One third of seafood sold in the U.S. is mislabeled as the wrong species of fish, with rates as high as 59 and 87 percent for tuna and red snapper respectively. Seafood fraud and other illicit fishing activities are so widespread, they cost the global economy up to $23.5 billion annually and are estimated to taint one in every five wild caught fish.

But a change in the winds should give these pirates pause.

A confluence of technology, policy, and international cooperation has given the fight against IUU fishing sustained momentum in recent years. From satellites to sabotage, a number of projects and initiatives have sought to address the many challenges posed by IUU fishing. Taken together, the following seven strategies hold the potential to end illegal fishing.

Global Fishing Watch allows anyone with an internet connection to track fishing vessels in real time to monitor signs of IUU fishing. The heat map above indicates the location of the global fishing fleet with orange and white dots. A similar monitoring tool, Project Eyes on the Sea, is used by law enforcement to detect illegal fishing activity inside MPAs. Photo credit: Global Fishing Watch.

The rise of satellite technology has been revolutionary. Television, radio, and cellular signals as well as the Internet, weather forecasting, military observing and remote sensing all rely on satellites. Perhaps most important of all is GPS technology, which relies on satellites to pinpoint a specific geographic location. With applications across many fields and sectors, GPS technology has recently been put to use to monitor the movement and behavior of fishing vessels on the high seas.

Platforms such as Global Fishing Watch, a product of Google, Skytruth and Oceana, and PEW’s Project Eyes on the Sea collect data from Automatic Identification System (AIS) receivers aboard thousands of ships. A GPS-based technology, AIS reports the location, speed, and identity of vessels and is commonly used to avoid collisions at sea. By analyzing AIS movement patterns, Global Fishing Watch and Project Eyes on the Sea can detect fishing activity in real time across the globe. When this information is overlayed with other data, such as MPA or country borders, it can be used to identify vessels engaged in IUU fishing. These recently released tools will help to hold illegal fishing vessels accountable, reward honest fishermen, and bring traceability to the seafood supply chain.

The government of Indonesia blows up an illegal fishing vessel as part of the country’s efforts to crack down on IUU fishing. Photo credit: Sea Shepherd.

Pirate fishing is most prevalent where fisheries regulations and enforcement are weakest. This makes developing countries, which often lack sufficient resources to combat IUU fishing, a target for well-equipped fleets of foreign fishing vessels. In Indonesia, where IUU fishing vessels siphon an estimated $3 billion annually from the local economy, the government has stepped up to confront the pirates head on. Under the leadership of Fisheries Minister Susi Pudjiastuti, Indonesia has condemned and blown up over 170 foreign vessels engaged in IUU fishing inside the country’s exclusive economic zone. The neighboring island nation of Palau has used similar tactics to deter illegal fishing, having burned and sunk at least 20 illegal fishing vessels after arresting their crewmembers. These explosive tactics are meant to serve as a powerful deterrent to potential pirates, and appear to be working. Minister Pudjiastuti has reported that local fish catches have risen dramatically following the forced removal of IUU vessels.

Fishackathon brings together programmers from around the world to create innovative solutions to problems facing fisheries. Photo credit: Fishackathon.

When innovative minds gather to tackle tough problems like overfishing, the results are extraordinary. Since 2014, computer programmers, analysts, and entrepreneurs have gathered at the annual Fishackathon, a weekend-long contest where participants compete to develop technological solutions to overfishing, seafood fraud, and IUU fishing. Projects such as KnowFish, a mobile app that generates a location-based list of fishing regulations, and Tap-a-Boat, a mobile mini game that uses crowd-sourcing to identify IUU vessels, have immense potential to increase the capacity of port samplers to apprehend illegal fishing vessels as they unload their catch. Other Fishackathon creations have been developed to detect seafood fraud, report lost fishing gear, identify bycatch, and encourage beach clean ups. The next Fishackathon will take place from April 21-23 in 2017. 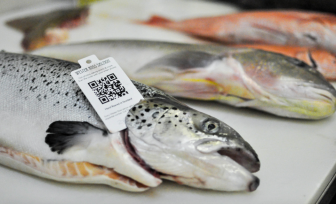 Oceana launched a national seafood fraud investigation in 2012. Its findings suggest that 1 in 3 fish sold in the U.S. are mislabelled. Photo credit: Oceana/Jenn Hueting.

Sometimes it takes investigative reporting to start a constructive dialogue. As part of a massive undercover seafood fraud investigation in 2012, the conservation group Oceana tested the DNA of over 1,200 seafood samples from grocery stores and restaurants across the United States. Oceana found that 33% of U.S. seafood is mislabeled as the wrong species of fish, with fraud rates as high as 87% for species like red snapper. The report singled out sushi restaurants as one of the worst offenders, with an average mislabeling rate of 74%, and identified Southern California as a hotspot of seafood fraud. Oceana’s species, location, and supplier specific data has helped law enforcement focus their efforts against the worst offenders. Prompted by Oceana’s findings, the Los Alamos Department of Public Health launched their own investigation into seafood fraud in Southern California, and exposed 180 grocers and restaurants engaged in seafood fraud.

In recent years, ocean protection and IUU fishing have become high profile international issues. The Port State Measures Agreement (PSMA), a treaty that entered into effect in 2016, capitalizes on that international momentum by enhancing port control procedures to stop IUU fishing. Under the agreement, fishers are required to provide information about where and how their fish were caught before arriving in a port. The country where a fishing vessel unloads its catch, known as the Port State, may refuse entry to vessels that cannot provide this information or are otherwise suspected of IUU fishing. By standardizing port control procedures around the world, the PSMA will help all countries close their ports to pirate fishing. 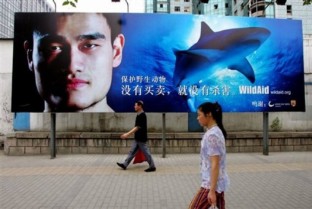 As consumers of both legally and illegally caught seafood, the general public has an enormous role to play in the fight against IUU fishing. Public awareness campaigns that highlight the dangers of IUU fishing empower consumers to make sustainable purchases and demand transparency in the seafood supply chain.

One example of a successful public awareness campaign can be found in China, where WildAid and former basketball star Yao Ming have launched a movement to end shark finning. With 100 million sharks removed from the ocean each year, much of them through IUU fishing, Ming’s campaign slogan “when the buying stops, the killing can too” shined a much needed spotlight on the issue. In 2006 as many as 75% of Chinese citizens were unaware that shark fin soup, directly translated as “fish-wing soup” in Mandarin, even came from sharks. Following Ming’s campaign, public perception of shark fin soup had changed drastically: 82% of Chinese citizens polled in 2013 said they would stop their consumption of shark fin soup. 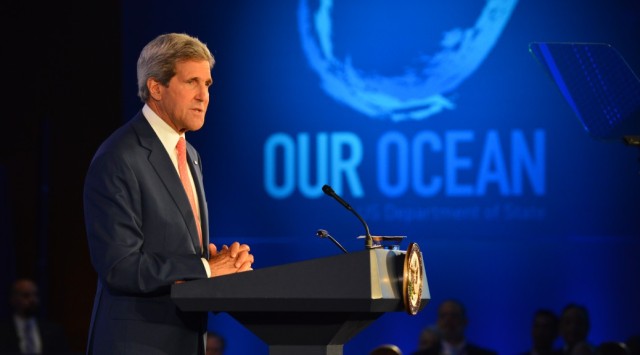 Secretary of State John Kerry has used the annual Our Ocean conference to generate momentum on a number of ocean issues, including MPAs and IUU fishing, since launching the conference in 2014. Photo credit: Marine Conservation Institute.

While IUU fishing has no one quick fix, one strategy has stood out as the most successful by far at generating funding and momentum. The Our Ocean Conference, an annual gathering of politicians, business leaders, diplomats, scientists, and visionary thinkers, has emerged as an international force for triggering action on ocean issues. Innovative programs like Global Fishing Watch, Fishackathon, and others made their debut at the conference, which raised $5.24 billion for ocean conservation in 2016 alone. IUU fishing was one of the primary issues addressed by the Our Ocean conference in 2016, along with cleaning marine debris, halting overfishing, creating MPAs, and combatting climate change. You can read more about the Our Ocean 2016 commitments here.

Satellites, treaties, hackathons and conferences have the potential to keep pirate fishers from plundering the ocean. But you have an important role to play as well. Through our choices as consumers, we all have the power to support legal fisheries and discourage IUU fishing and seafood fraud. Here are some easy steps you can take to blow pirate fishing out of the water.

← The pros and cons of large and small marine protected areas
Protecting the pangolin – Can name recognition save species? →

Take Home Message: Illegal, unreported, and unregulated fishing (IUU) damages the environment and costs the global economy up to $23.5 billion annually. Satellite monitoring, strong fisheries regulations, mobile apps, undercover investigations, international cooperation, and public education all have a role to play in eliminating IUU fishing. You also have a role to play as a consumer by staying alert for signs of seafood fraud.