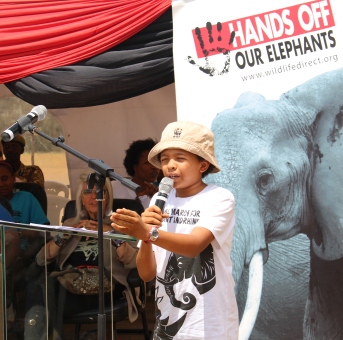 I sat down for an Skype interview with Luca to ask him about his childhood activism, YARH’s projects, wildlife conservation, and his plans for the future.

The full transcript of his responses are shown below.

Many people are passionate about conservation or the environment, but few people actually take the time and effort to make a difference. Was there a specific event in your life that inspired you to start getting involved? What pushed your love of animals and nature to the next level?

Luca – Well there was this one time, just before I started Young Animal Rescue Heroes (YARH), where there was this library book in my school, and the topic was on endangered mammals. So I started reading the book, and then I found out all these facts about animals being wiped out by people, by clearing of forests, by habitat loss, by all these problems that animals are facing. So, from then I started thinking about what I could do to make a difference in the area of conservation, and YARH began.

Tell me about the recycling work YARH does with Chandaria and Ekotech Limited. How did you first reach out to these companies, and what has the experience of promoting recycling in schools been like?

Luca – We got to know Chandaria Industries first and their work at an event where somebody from Chandaria talked about recycling, and then immediately I thought ‘Wow, this is what I want to do with YARH, I want to recycle and help with waste management’. So I realized, with all the waste paper in Nairobi, which would ordinarily be burned, if I collected the waste and sold it to them then I would have an opportunity to raise money to help endangered wildlife. And then we also met Ekotech later on, which [does] the same work but with tetrapacks and milk and juice cartons. And since then, we’ve been collecting paper, let me show you (shows me several bags of paper trash as well as a large pile of cartons), and then once there’s a large enough amount, then we give it to them and then they pay us per kilo. After that we give some of the money to KWS (Kenya Wildlife Service) so that they can do most of the work and help the rangers, and then I also donate books to schools.

Tell me more about your book donation efforts.

Luca – This is the third year we are actually doing the book donation. It started in 2013. After I released my second song in New York, it was on my birthday that I came back, and I had the best week of my life, so I said I don’t want any more gifts, that [the trip] was the best gift I could get.  So then I thought what if someone else could have this privilege of getting something they always wanted. So I stated with the schools in the slums and we started donating books to them, and then a year later we did the same thing, no party, only books being given out. Basically the school [where we donated], the classes were [outside] under trees and they didn’t have proper resources for books or even clothes. Since then there have been no more birthday parties, and we have just been donating books to people who need them the most.

We also do workshops where we invite children from schools, and we tell them the importance of the environment and wildlife, and why those things are worth protecting. We’re supposed to be doing another workshop this month, and tomorrow we are having a clean up in the slums.

So usually it’s students attending these workshops and you teach them about environmental stuff?

Luca – Of course, but also representatives and people who work in that actual field. We invite guest speakers, for example, in our last [workshop] we invited people from organizations such as Chandaria Industries, we invited Paula Kahumbu, the biggest conservationist in Kenya, and we invited the kid who came up with lion lights, [a light fixture invented to minimize human wildlife conflict with lions].

You participated in the March for Elephants and Rhinos in October along with 200 students whom you convinced to participate. Can you tell me a little bit more about participating in the march and how you mobilized so many students to join you?

Luca – Well the experience was amazing, walking over 11 km in a whole day just for a good cause, elephants, rhinos, it was really really nice. To answer the second question, the kids are from YARH’s network. YARH has friends who are keen on wildlife and know what’s happening to the wildlife, so they’ll participate in some of the events when we call them. And there have been many schools that have been asking us if they can participate in events, [and we connect with them] mainly through the workshops.

In the middle, Luca stands with his fist held high during the Global March fro Elephants and Rhinos. Photo credit: Mary Marete and Luca Berardi.

What is the next step for YARH? What new projects would you like to start in the future?

Luca – Well, we are going to be moving to Tanzania in the summer, which I imagine is facing the same challenges as Kenya in terms of poaching, human wildlife conflict, etc. From there we’d have to find a problem and after that we’d have to build up on [that problem] and try to create as much awareness as we can in that area.

What has been your biggest challenge since starting YARH? Your biggest success so far?

Luca – Resources have been very hard to get, and also trying to tell people to actually help us and YARH, because people say ‘Oh, we can’t support this organization that was started by a child’. So, that has been a problem but our successes have included the workshops, how we have taken advantage of those opportunities of networking with that many schools and that many children, and also with other [environmental] organizations.

You obviously care a lot about many different conservation causes and issues facing endangered wildlife. Do you have an issue (for example, climate change, deforestation, wildlife crime, overfishing, etc.) that you are most passionate about or feel is the most important, and if so why?

Luca – I’d say exploitation of wildlife, such as poaching and human wildlife conflict because [they are major] causes of wildlife populations decreasing. These problems are big in Kenya, particularly human wildlife conflict, such as will elephants and lions. The other day, a person was attacked by a lion at night and the rangers had to shoot the lion since they had no [tranquilizer] darts, so yes it is a big problem.

If you could travel to visit any ecosystem and/or see any animal in the wild, where would you go/what would you want see?

Luca – I have three answers for each: the Great Barrier Reef, Antarctica, and the forests in Borneo or Sumatra [for the ecosystems I’d most like to see], and I’d like to see a Siberian tiger, a blue whale, and a kakapo.

Do you have any words for other kids who are interested in conservation?

Luca – Always follow your dream, no matter how out of the box it may be, and always keep your eye on your own prize. Always get over obstacles and never let anything stop you until you achieve what you wanted to achieve.

I understand your parents have been very supportive of you, including YARH, your music career, and your world travels. How important has their support been to your success? How can parents around the world inspire their children who are interested in nature/the environment to go above and beyond?

Luca – Well, my parents have always helped me, they’ve always supported me in everything that I’ve done, and I thank them a lot for that. Ever since I started YARH, I needed help, and the first idea I had for YARH had me going into the field [myself] and stopping poachers, and my mom said ‘No, no, we first have to start creating awareness’, and then the whole idea sprang of creating awareness. Then I also had another idea, to create an island where you could put endangered species so that they can’t be killed by poachers, and my mom said that ‘islands are too expensive’. So I guess they help me a lot to see what I could do in the short term and long term. 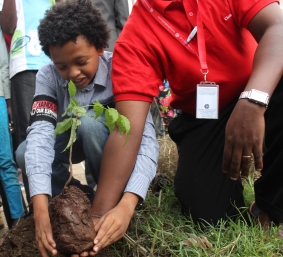 “If you give him homework with a choice of three questions, he chooses the hardest. That’s Luca.” Photo credit: Mary Marete and Luca Berardi.

What I should say to parents worldwide is that you have to support your child or else they will get discouraged and they won’t get the opportunity to do what they want to do in life, whether that is to be an environmentalist or a conservationist or beyond. Always help your child to achieve their dreams.

So it sounds like your mom served a valuable function to support your dreams but to also keep them doable and realistic?

Luca – Yes. Although I do still miss the island idea.