Beyond baby pandas – What zoos do for conservation

IT’S BEEN an emotional week for the staff at Smithsonian National Zoo.

A wave of excitement overtook the Washington D.C. region last Saturday night (Aug 22) after a surprise announcement. The National Zoo’s giant panda Mei Xiang, who had been suspected of being pregnant just the week before, gave birth to twin panda cubs, each the size of a stick of butter.

The pink, hairless cubs were incredibly fragile. The prospect of twins complicated the situation, and necessitated that zoo staff swap the cubs in and out of Mei Xiang’s care to provide each with a chance to nurse and bond with her. 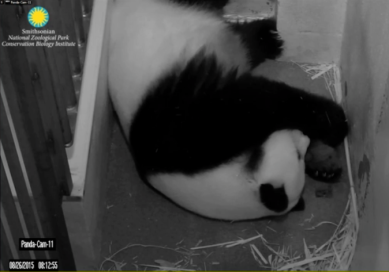 About half of all panda pregnancies result in twins, but in the wild a panda will often abandon the weaker offspring so that the stronger one will have a better chance of survival. Mei Xiang began favoring her larger cub a few days after giving birth, leaving the zoo keepers to rear the smaller cub by hand.

Despite the zoo’s best efforts, the smaller of the two cubs died Wednesday afternoon (Aug 26) after 4 days of life.  After such an intense push, zoo staff were devastated.

For zoos and conservation centers, the practice of raising baby pandas is riddled with predictions and uncertainties. Female pandas have a 48-hour window of fertility that occurs only once a year, during which time they must be artificially inseminated by zoo staff.  After that, it is almost impossible to differentiate between a real pregnancy and a pseudopregnancy until a cub is born.

Despite the death of the smaller cub, Mei Xiang is attentively looking after her surviving cub, who appears to be developing normally.  The survival of the larger cub makes this week a success for panda breeding and conservation at the National Zoo.

Mei Xiang is not a first time mother, and she is an incredible asset for captive panda breeding efforts. After years of trying for cubs, she gave birth to the immensely popular Tai Shan in 2005, who has since been sent to China. In 2013 she gave birth to a daughter named Bao Bao, who continues to live at the National Zoo.

The National Zoo does not own its pandas but leases them from China in 10-year installments for $10 million apiece. More than half of that sum is dedicated to giant panda conservation efforts in China.

There are very few giant pandas left in the wild. Their numbers decreased for much of the 20th century, bottoming out in the 1990s due to habitat loss. Things have turned around since then: the Chinese government moved to protect mountainous forest habitat, and panda populations in the Sichuan province of China appear to be steady at 1,500 individuals, even showing tentative signs of increase. Conservation funding from zoos worldwide has contributed to such a turnaround.

The low birth rate of giant pandas, both in captivity and in the wild, make populations very sensitive to any mortality or habitat loss. Slow breeding species with small population sizes such as the giant panda benefit greatly from captive breeding programs, where zoos cooperate with one another to increase population size of an endangered species.

The ultimate goal of breeding programs is to translate success in captivity into an increase in the number of wild animals of a particular species. While this has yet to be done for pandas due to lack of available habitat and other ecological concerns, other animals that have gone extinct in the wild, such as the black footed ferret and the California condor, have reestablished wild populations with the help of captive breeding programs at zoos.

Conservation research at the zoo isn’t confined to pandas, or to captive breeding programs. In 2013, the National Zoo was involved in 80 different research projects and initiatives across many taxa, ranging in focus from animal welfare to species and habitat conservation. 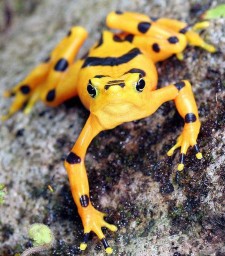 National Zoo conservation research has yielded progress developing a drug to treat frogs infected with the chytrid fungus, a pandemic decimating amphibians around the globe. Scientists at the zoo are tracking the movement of wild Asian elephants by satellite to minimize human-elephant conflict. And field studies in Costa Rica carried out by National Zoo researchers are investigating the impact of sustainable coffee farming on mammal diversity in the region.

Zoos and aquariums broadened their focus from providing entertainment to educating the public about wildlife and conservation in the 1980s. Informative signposts about conservation status, threats to species, and general facts about ecology popped up around zoos and aquariums worldwide as these institutions funneled money into conservation research. The result was a more educated and engaged public.

A 2008 poll found that 58% of visitors left zoos with the impression that conservation and biodiversity are “very important”.

To increase audience engagement, zoos and aquariums have raced to establish interactive exhibits with computer screens, themed games, and faux science outposts that put visitors in the decision-making roll of the conservation scientist. The Asian elephant outpost at the National Zoo even makes donations interactive by allowing visitors to choose where their money goes. By choosing which zoo research project to fund, visitors are engaged in real world conservation decision-making.

In addition, many institutions have begun investing in local conservation projects. The National Aquarium in Baltimore has invested heavily in wetland restoration and invasive species removal in the greater Baltimore area, resulting in improvements to the local ecosystem. By acting locally, visitors are more likely to realize the direct benefits of conservation and view conservation in a favorable light.

Supporting the work of zoos and aquariums may seem as simple as visiting your local institution. However, it’s a bit more nuanced than that.

And above all, get involved with your local zoo or aquarium. Volunteer, donate, or attend community events at the zoo. In doing so, you will be joining the conservation community that made success stories like Mei Xiang’s cubs possible.

Take Home Message: Captive breeding programs increase the population size and genetic diversity of endangered species, but zoo conservation efforts extend much further than that to include conservation research and field studies, as well as environmental education on a massive scale.  Make sure to only visit institutions accredited by the Association of Zoos and Aquariums (AZA), and pay attention to conservation signage, interactive exhibits, and keeper talks while at the zoo.  By getting involved with your local zoo, you help to make countless conservation projects possible.