The pros and cons of large and small marine protected areas

Papahānaumokuā Marine National Monument harbors more than 7,000 species, a quarter of which are found nowhere else on Earth. Photo credit: NOAA.

ON AUGUST 26th, 2016, President Obama authorized the expansion of Papahānaumokuākea Marine National Monument. The Hawaiian reserve harbors more than 7,000 species, a quarter of which are found nowhere else on Earth. It is the habitat of the Hawaiian monk seal, a nesting ground for 14 million sea birds, and home to the world’s oldest living organism.

Thanks to President Obama, it also the largest protected area on the planet. The expanded monument now covers 582,578 square miles, an area twice the size of Texas.

Three weeks later, the President made history again by designating the Northeast Canyons and Seamounts Marine National Monument off the coast of New England. While the 4,913 square mile monument is only a fraction of the size of Papahānaumokuākea, it protects a series of unique habitats, including submerged mountains known as seamounts and deep-sea canyons teeming with vibrantly colored corals. It is also the first marine monument to be designated in the Atlantic.

The new boundaries of Papahānaumokuā. 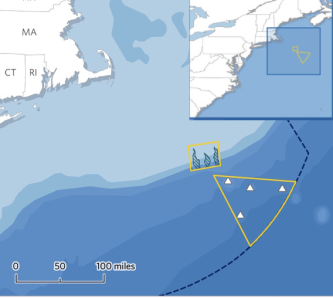 The Northeast Canyons and Seamounts (in yellow).

Marine monuments are a type of marine protected area, or MPA, and can be thought of as the national parks of the ocean. As special ocean places set aside for conservation, they have emerged as a vital tool for protecting marine ecosystems from overfishing, oil drilling, and other forms of human exploitation.

MPAs have been shown to significantly increase fish numbers and ecosystem health by giving exploited ecosystems a chance to recover from human disturbances.

By formally protecting these two special marine habitats, the President has brought the world a step closer towards reaching Aichi Target 11, the international goal of protecting 17% of the world’s land surface and 10% of the ocean by 2020.

Corals, including cup corals and bubblegum corals reside on the hard substrate at the bottom of the Northeast Canyons and Seamounts Marine National Monument. Photo credit: NOAA.

Progress towards Aichi Target 11 has been promising. Roughly 3% of the ocean is currently protected, with an additional 3% slated for protection in proposed MPAs. That represents significant progress since 2010, when less than 1% of the ocean was protected.

Most of the progress towards Aichi Target 11 has come from the designation of marine reserves larger than 40,000 square miles, known as large-scale MPAs. Papahānaumokuākea and other large-scale MPAs protect diverse marine ecosystems and have been described as one of the most effective tools available for safeguarding marine biodiversity.

But what about smaller MPAs such as the Northeast Canyons and Seamounts? Protecting 4,913 square miles of ocean doesn’t push the global MPA total higher by much, but does that matter? Do small MPAs offer unique benefits that are not readily obtainable using a large-scale approach to marine protection?

As conservation-minded countries look for the next special marine place to protect, it is worth examining the pros and cons of both the large and small-scale MPAs. Does the ocean stand to benefit more from reserves like Papahānaumokuākea or the Northeast Canyons and Seamounts, or is a mixed approach to conservation the best strategy?

One major benefit of large-scale MPAs is that, due to their size, they protect not only species but entire ecosystems, from the top predators to the tiny fish, from the colorful corals to the deep-sea abyss. By preserving ecosystem dynamics and species interactions, MPAs make marine ecosystems more resilient to other threats that are more difficult to manage in the short term, such as rising ocean temperatures or ocean acidification.

Thus, large MPAs act as both marine reserves and climate reserves by improving ecosystem resilience over a large-scale.

An endangered Hawaiian monk seal soaks up the sun on a beach in Papahānaumokuākea Marnine National Monument. Photo: NMFS.

Large MPAs also help to preserve vital connections between different marine habitats. Many marine organisms rely on multiple habitats throughout their lifecycle, growing up amidst the roots of mangrove trees before moving on to coral reefs or the open ocean. Highly migratory species, including tuna, sharks, and swordfish, are most feasibly protected with large MPAs, such as Papahānaumokuākea, that promote habitat connectivity.

With only a small fraction of the ocean protected and low public awareness of the need for marine protection, high profile announcements of large MPAs also help to build momentum for future MPA designations. Following the announcement of Papahānaumokuākea, leaders from 25 countries including Ecuador, Colombia, Costa Rica, France and the UK have committed to protect a combined total of one million square miles of ocean.

But not all momentum built by large MPA announcements is beneficial. Despite the long-term benefits of MPAs, many in the fishing and offshore energy industries view MPAs with suspicion and concern. Large-scale announcements that do not consider the interests of these industries may galvanize them against further protection, threatening conservation progress down the road.

The immense size of reserves such as Papahānaumokuākea creates other limitations.

Because coastal waters are often crowded with competing human uses, large-scale MPAs tend to be located far from shorelines in the open ocean. Compared to coastal regions, the open ocean faces few human threats. This makes large-scale MPAs potentially less useful as a conservation tool. At the same time, the isolation of many large-scale MPAs makes their boundaries harder to enforce, hampering their ability to prevent the threats that do exist, such as illegal fishing.

Above: the global distribution of large-scale MPAs. Below: the level of human impact on different regions of the ocean. Coastal regions tend to suffer from higher human impacts than the open ocean, but large-scale MPAs tend to be located far from continental shorelines. Photo credit: NCEAS.

Smaller MPAs do not provide the same degree of broad, ecosystem based protection as large-scale MPAs, but they do allow for targeted protection in busy regions of the ocean, such as coastal habitats.

Although shallow coastal habitats cover just 7% of the ocean’s area, their waters are home to a majority of all marine life. With more than half the world’s population living within 40 miles of the ocean, threats from development, pollution, and fishing are highest along crowded coastlines. Small MPAs, such as the Northeast Canyons and Seamounts, or MPA networks such as the Great Barrier Reef Marine Park that contain both protected and human use areas, are best suited for protecting these areas.

Effective marine protection along coastlines all comes down to efficiency. By protecting habitats with the greatest potential for recovery, such as those with the highest biodiversity or those facing the greatest number of human threats, the effectiveness of protected areas can be maximized. As these resilient ocean places recover inside MPAs, their recovery positively impacts neighboring habitats as fish populations increase and disperse. This in turn benefits coastal populations that rely on ocean ecosystems for for their food or livelihood.

When MPAs are effective, they benefit surrounding ecosystems and fisheries by acting as a source of fish and larvae. Photo credit: Kaleomanuiwa Wong.

By strategically placing small or mixed use MPAs, conservationists can often protect important ecosystems while allowing for other ocean uses. This increases buy-in to the broader concept of marine conservation from all fishers, industry, and other stakeholders.

Of course, this ideal scenario doesn’t always pan out as planned. Several New England fisheries are challenging the legality of the newly created Northeast Canyons and Seamounts Monument, despite its small size. Small MPAs are also more likely than large-scale MPAs to suffer from edge effects as human uses continue around their borders. In the end, small MPAs are an imperfect instrument for marine protection, just like large-scale MPAs.

The Future of Ocean Protection

The pros and cons of large and small MPAs make each suited for specific marine protection situations. Both approaches are necessary to reach Aichi Target 11 by 2020.

But protecting 10% of the ocean is only part of the solution. To create enduring ecological and human benefits, MPA coverage needs to accurately represent the diversity of ecosystems and the human threats they face. If world leaders neglect to protect entire geographic regions or ecosystems, the value of protecting 10% of the ocean will be diminished.

The distribution of MPAs is currently uneven. While 36% of marine ecosystems have at least 10% of their area protected, 22% receive barely any protection at all.

Conservationists need to pursue a mix of large and small MPAs to protect a more representative cross section of the ocean’s ecosystems. In locations where MPAs are unpractical or inappropriate, leaders should make use of regional ocean planning and scientific fisheries management to ensure the marine environment doesn’t get left behind.

In pursuing a percentage, ocean leaders must not forget the true goal of ocean protection: promoting resilience. MPAs will not solve every problem facing the ocean and the species that live in it, but protecting key areas is crucial for promoting the capacity of marine systems to bounce back from disturbances and endure in the face of growing threats.

The designation of these two monuments culminates an impressive eight years of marine conservation by President Obama, who has embraced the cause of conservation and demonstrated leadership on ocean issues. He seems to understand the importance of his role. As he said at the recent Our Ocean conference in Washington D.C., “while it is our oceans’ contours that shape our coastlines, it is what we decide and do here that will shape our oceans’ future.”

← 10 everyday activities you didn’t know were eco-friendly
Satellites, dynamite and more – 7 ways to save the ocean from illegal fishing →
Take Home Message: The pros and cons of large and small MPAs make each suited for specific marine protection situations. Both approaches are necessary if the international community hopes to protect 10% of the ocean by 2020. When protected areas are not practical or appropriate, regional ocean planning and scientific fisheries management can be used to safeguard marine ecosystems.