CORAL REEFS across the globe are under threat from a predator that looks less like a sea creature and more like an alien life form. 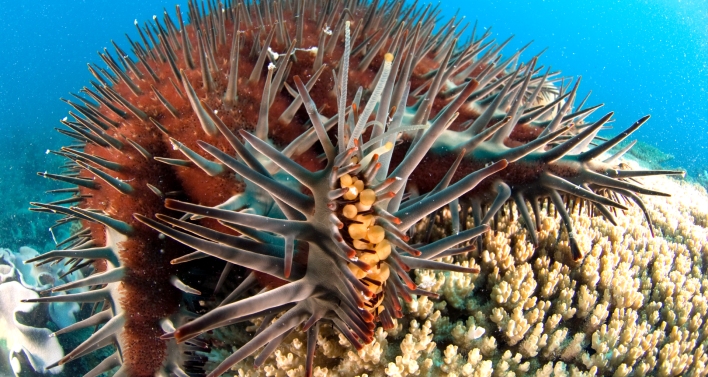 A crown of thorns starfish. Photo credit: Science in Public.

The crown of thorns starfish is a massive, prickly, and venomous inhabitant of the tropical waters surrounding coral reefs. Capable of growing up to a meter in diameter, they can move quite quickly (at least for a starfish) and have an insatiable appetite for coral.

A single crown of thorns starfish, or COTS for short, can eat up to 6 square meters of living coral each year. The starfish clamber on top of branching corals, contorting their body shape to cover as much coral surface area as possible. Then, they extrude their stomach and secrete digestive fluids, dissolving the thin layer of living coral tissue to leave behind a barren white coral skeleton. 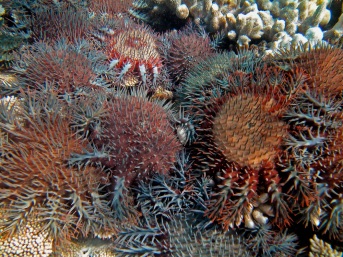 An outbreak of crown of thorns starfish, or COTS for short. Photo credit: Science in Public.

Australia has been hit particularly hard by the ravenous starfish. Since 1985, the Great Barrier Reef has lost half of its coral cover, with COTS related damage accounting for 42% of the decrease. After cyclones and mass bleaching events, COTS outbreaks pose the greatest threat to coral reef ecosystems.

Stopping the spread of COTS has emerged as a top priority for coral reef managers and conservationists. Scientists are using every tool in their arsenal to subdue the relentless invertebrate, from high tech automated robots to everyday household products.

The Role of Starfish on the Reef

Surprisingly, a species capable of such destruction is actually a native, naturally occurring component of coral reef ecosystems. 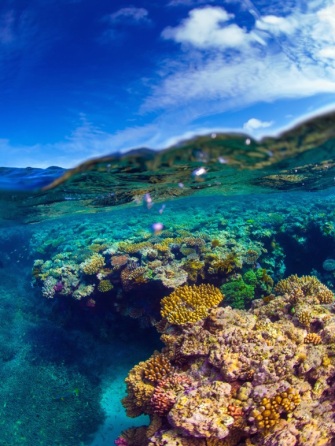 At densities below 30 starfish per hectare, COTS play a vital roll in coral reef ecosystems. The starfish prefer to eat rapidly growing branching corals, pruning them back like an undersea gardener. This reef maintenance allows slower growing corals to thrive alongside their prolific neighbors, and increases the overall diversity of the reef.

Problems occur when COTS populations rise above manageable thresholds, and hordes of insatiable starfish prune coral faster than they can regenerate.

Sudden increases in COTS concentrations called outbreaks can exceed concentrations of 1000 starfish per hectare. On the Great Barrier Reef, outbreaks can last up to 15 years as the plague of starfish spread along the 2300 km length of the reef. Scientists discovered the first large starfish outbreak in 1962, and the latest COTS outbreak on the Great Barrier Reef commenced in 2010. 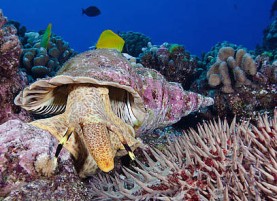 The Triton trumpet snail is one of the COTS few predators. Photo credit: Oceanwide Images.

Starfish outbreaks on coral reefs occur when reef ecosystems fall out of balance. Normally, COTS populations are kept in check in two ways. Limited nutrients in the water column keep too many COTS larvae from reaching adulthood, and predation from certain large fish and snails keep adult COTS populations under control.

For the starfish, human pressures have changed coral reef ecosystems for the better. Overharvesting predatory fish and snails as well as nutrient influxes from sewage and agricultural runoff create ideal conditions for COTS and leave their populations unchecked.

While policy makers haggle over the best means of limiting agricultural runoff, scientists have been hard at work researching ways to disrupt the current starfish outbreak.

Researchers at the Queensland University of Technology have recently begun testing their very own starfish-killing contraption. Known as COTSbot, the fully automated robot is capable of detecting the prickly predator out in the field, relying on GPS navigation and an enormous database of starfish images taken by scientific divers to positively identify COTS.  Once the robot encounters the starfish, it injects a complex serum of chemicals into the organism, euthanizing it over a period of 24 to 48 hours.

Thanks to a recent study from James Cook University, COTSbot’s complex serum of chemicals can be replaced with an ecologically harmless, permit free, easily obtained, and inexpensive alternative.

That chemical is dilute acetic acid, also known as vinegar.

By injecting each starfish with 25ml of household vinegar, researchers were able to kill 100% of their starfish test subjects within 48 hours. The acidity of the vinegar essentially disintegrates the starfish’s internal organs, dissolving them from the inside out.

Corals have shown promising signs of recovery on reefs where divers have euthanized COTS.  But euthanizing starfish one by one with automated robots and cooking ingredients isn’t a permanent fix.

With an estimated starfish population of 1.5 million, injecting every COTS on the Great Barrier Reef is an outlandishly enormous task. However, the robot can function as a stopgap for saving individual reefs that make up the Great Barrier Reef. A single dive team can euthanize 1,000 starfish in a 45-minute dive, and COTSbot will be able to stay underwater far longer than a human diver once fully operational. 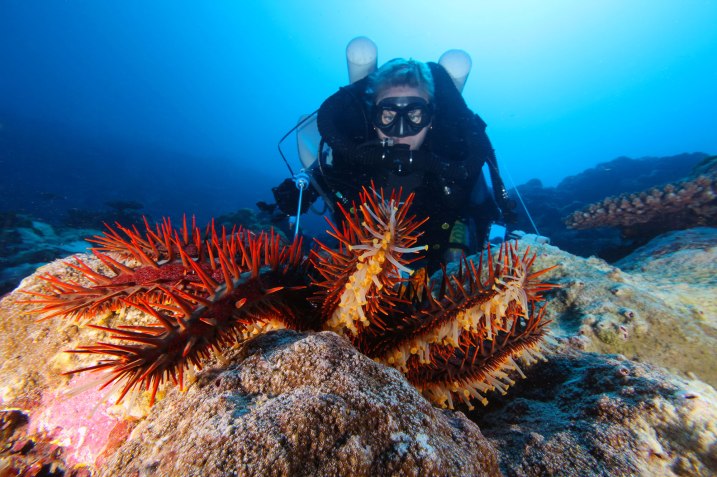 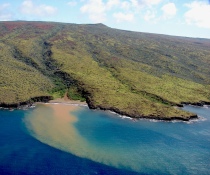 Human development and agricultural runoff are responsible for water quality problems across the world. Apart from causing outbreaks of unwanted starfish, polluted waters can harbor disease and spawn algal blooms, which can cause toxic, oxygen-depleted dead zones to form.

Even if you don’t live near a coral reef, you can take action to protect the water quality of costal ecosystems near you.

← What does the term ‘endangered species’ really mean?
For Costa Rican sea turtles, the second time’s the charm →

Take Home Message: Crown of thorns starfish are ravenous predators of coral, and their population outbursts threaten coral reefs worldwide. Thankfully, researchers at two Australian universities have devised a clever action plan to address the problem. Using an automated starfish killing robot, scientists hope to control starfish outbreaks by injecting the invertebrates with vinegar, dissolving them from the inside out. Starfish outbreaks are caused by poor water quality, which is a problem for many ecosystems, not just reefs. Help protect your local water quality by reducing runoff from your yard, using less fertilizer and pesticides, and by buying organic.