For Costa Rican sea turtles, the second time’s the charm

IF AT FIRST you don’t succeed, try, try again.

Thousands of persistent olive ridley sea turtles did just that last week, successfully nesting on a remote beach after a failed attempt to do so two weeks prior.

During their first attempt, the turtles were greeted by hundreds of curious onlookers hoping to catch a glimpse of the nesting process. But in a stunning example of ecotourism gone wrong, the presence of so many loud and intrusive tourists disrupted the very event they had come to see.

Stretching seven kilometers along the coast of western Costa Rica, Ostional beach is one of the most important nesting sites in the world for olive ridley sea turtles. Unlike other sea turtle species, olive ridleys nest together in a massive spectacle known as an arribada. Sea turtles are usually solitary, but during an arribada they pour onto a few select beaches by the thousands in a veritable reptilian tsunami.

When the turtles emerged from the surf early last month, they were overwhelmed by a crowd of selfie snapping tourists. As they trampled freshly laid eggs, onlookers attempted to get as close to the turtles as possible, touching them and even placing their children on top of turtles for photos.

Some tourists entered the beach as part of sanctioned tours, but many more entered through unauthorized access points. As tourists poured in by the busload, the two park rangers on duty struggled to control the surging crowds.

The majority of the sea turtles left the crowded beach and returned to sea without laying their eggs.

An example of ecotourism gone horribly wrong, where the urge to get a selfie with an egg-laying turtle trumped common sense and decency. Photo credit: SITRAMINAE.

Arribada occur about once a month, with the largest occuring during the wet season from August to November. While flooding often limits the influx of tourists to Ostional, below average rainfall associated with this year’s El Niño allowed more tourists than usual to access the beach.

While they are less well known than loggerheads and leatherbacks, olive ridley sea turtles are the most abundant of the 7 species of sea turtles, and can be found from Australia to the Americas. Despite their comparative abundance, olive ridley sea turtles are listed as vulnerable by the IUCN due to a myriad of threats, including egg predation, plastic pollution, coastal development, and indiscriminant fishing gear.

A Sea Change for Turtles

The National Park Police clamped down on unauthorized beach access, closing four of the six entrances to the beachfront. All beach goers must now wear wristbands to show that they are part of licensed tour groups, and only a limited number of tourists are allowed on the beach at any given time. The number of rangers will be increased during future arribada events, as will the number of traffic police, who will moderate the influx of tourists into the town of Ostional.

Following the rule changes, tourists are allowed to view nesting turtles for 30 minutes from a safe distance, and no touching wildlife or flash photography will be permitted.

Determined to give nesting a second try, an estimated 100,000 olive ridley sea turtles returned to Ostional on September 21st, two weeks earlier than expected. Thanks to the turtle’s surprise arrival and to newly implemented beach enforcement, the new arrivals met little resistance and were able to successfully lay their eggs.

The sea change at Ostional beach illustrates the value of environmental law enforcement. While the designation of national parks, protected areas, and no takes zones are good news for imperiled species, such efforts mean nothing without proper enforcement.

With proper funding, political will, and local backing, Ostional has been transformed from a tourist haven into a wildlife refuge. Hopefully the enforcement efforts will withstand the test of time to protect future generations of nesting sea turtles.

The massive gathering of thousands of nesting turtles is a natural wonder that everyone should be able to witness. At the same time, the actions of tourists should not prevent wildlife from behaving naturally or endanger imperiled species.

Conflicts between the desires of tourists and wildlife raise substantial questions. Can conservationists satisfy the wishes of tourists without compromising the needs of wildlife? Is it possible for environmental tourism to be low impact? And is ecotourism in pristine natural environments more harmful than helpful? 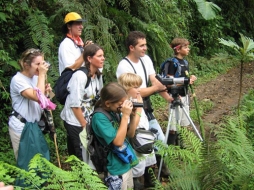 If you enjoy wildlife watching and other forms of ecotourism, you should consider these questions as you plan your next vacation. The truth is, all forms of tourism are not created equal. Environmentally focused sustainable tourism with an educational component, or ecotourism, often has a lower impact than conventional tourism, although the level of impact varies based on the activity.

Take two “eco-friendly” tourism activities: a guided hike through a rainforest, and a SCUBA diving trip to an offshore coral reef. While both tours offer valuable opportunities to visit and learn about delicate ecosystems, they each carry the potential for environmental harm. Too many people hiking a rainforest track can increase erosion and inadvertently lead to the introduction of invasive species. Too many divers can damage corals or introduce diseases to the reef, and the oil from too many dive boats can pollute the water.

While nearly all tourist activities carry some environmental risks, you can take certain steps to ensure your holiday plans don’t inadvertently harm wildlife or delicate ecosystems.

If every tourist on Ostional beach followed these simple steps, hundreds of threatened sea turtles would have been able to nest on their first try. But rather than wait for the tourists to get with the program, the persistent turtles will try, try again.

Take Home Message: In early September, a crowd of selfie-crazed tourists prevented thousands of sea turtles from nesting in Costa Rica. When the turtles returned weeks later, successful policy changes and increased law enforcement allowed them to nest in peace. Responsible wildlife viewing is a form of ecotourism, and it is your responsibility as an ecotourist to ensure your impact on local wildlife is minimal. Research tourism providers before traveling, view wildlife from a respectful distance, and follow the rules in national parks and protected areas.