The monarch butterfly’s highway to recovery

Like other economically important pollinator species, the monarch butterfly has faced steep population declines over the past two decades. Photo credit: Learnaboutnature.com

FOR AMERICA’S most beloved insect, the road to recovery is long and windy.

The incomparably iconic monarch butterfly, which graces gardens from Canada to Mexico, has faced steep population declines over the past two decades. The migratory monarch population has flirted with collapse in recent years, plummeting 96% from 1 billion butterflies in 1996 to a mere 33 million in 2013.

But high in the remote mountain forests of central Mexico, researchers are beginning to detect signs of a monarch recovery.

In 2015, researchers recorded 56 million butterflies, a 70% increase from the year before. Populations increased further in 2016, surging to an estimated 200 million monarchs. Overwintering populations haven’t been that high since the winter of 2010-11.

A similar survey of overwintering monarchs in California also showed a modest increase in butterfly numbers over the past year. 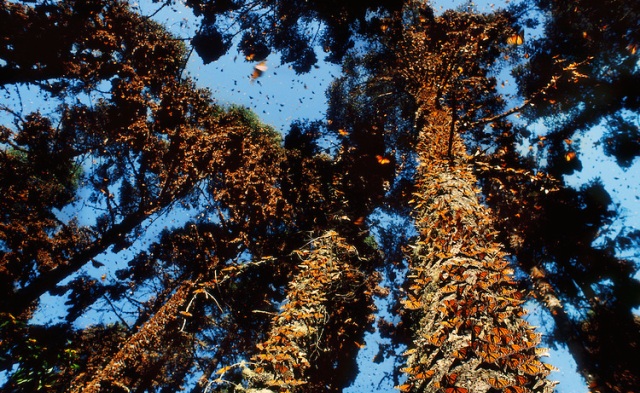 Most North American monarchs spend the cold winter months in the mild forests of Mexico, with smaller numbers congregating in California and Florida. Scientists take advantage of the concentrated butterfly gatherings by conducting annual population surveys during the winter.

The increase in monarch numbers should be regarded with tentative caution. Butterfly overwintering surveys have shown erratic population swings among monarchs in years past, with factors such as extreme weather events impacting overwintering success. 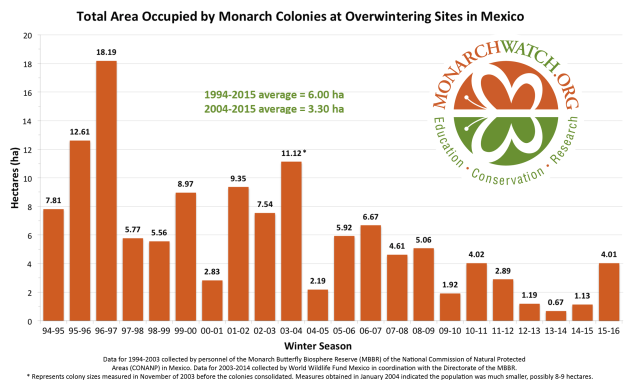 Still, the marginal increase in population numbers is promising, and many conservationists believe the monarchs are in the early stages of a sustained recovery.

Distinguishing between a fleeting population blip and a monarch revival is an important but difficult task, one that requires an understanding of monarch ecology, habitat threats, and recent conservation policies.

So the question begs asking: what caused the decline of the monarch butterfly in the first place, and what conservation policies have been enacted to aid in the insect’s recovery?

A Migration Under Threat

The monarch butterfly is the only species of insect known to undertake large-scale seasonal migrations.

Much like birds flying south for the winter, millions of monarch butterflies make the 3,000-mile journey from the northern United States and Canada to Mexico each year. Once in Mexico, monarchs group together in a few select mountain forest patches to weather out the winter months, overwintering in a state of suspended hibernation.

The migration has been described as one of the most spectacular natural phenomena on the planet.

While the monarch butterfly is not threatened with extinction at the species level, the fate of their migration is uncertain, with fewer and fewer monarchs recorded in surveys of overwintering sites over the years. Photo credit: Monarch Watch, USGS.

Monarch caterpillars munch on milkweed leaves. Milkweed is toxic to other animals, but monarchs have evolved to rely on the plant. By internalizing the toxin found in milkweed, monarchs themselves become toxic to birds and any other potential predators. Photo credit: Kim Smith.

The decline of the monarch’s migration has been linked primarily to habitat destruction. The larvae of monarch butterflies depend on a specific family of plants called milkweed as a nursery and food source. Unfortunately for monarchs, milkweed habitat has been severely diminished.

Milkweed used to thrive on the margins of agricultural fields and in between rows of crops, but the rise of genetically modified crops and the indiscriminant use of herbicides such as Roundup have destroyed 167 million acres of milkweed habitat since 1996. The creeping spread of urban sprawl has also contributed, with milkweed habitat increasingly paved over to make room for development.

Compounding the scarcity of milkweed, the monarch’s overwintering habitats in Mexico have faced threats from illegal logging. Other threats, such as invasive tropical milkweed, parasites, and climate change have been linked to the decline in migrating monarchs as well.

The Road to Recovery

There are over 100 varieties of milkweed. From the top to bottom: Common milkweed (A. syriaca), Lanceolate milkweed (A. lanceolata), and Purple milkweed (A. purpurascens). Photo credit: Wikimedia.

Since the summit, each country has stepped up monarch conservation efforts.

Later in 2014, the Mexican government cracked down on illegal logging in and around the monarch’s overwintering habitat, and the Canadian government removed milkweed from its noxious plant list. The U.S. government is considering listing the monarch butterfly under the Endangered Species Act, a move that would grant the species federal protection.

The U.S. government has also partnered with the National Wildlife Federation (NWF) and the National Fish and Wildlife Foundation (NFWF) to raise public awareness about the plight of the monarch butterfly and restore over 200,000 acres of milkweed habitat.

The predominance of herbicides in agricultural areas has forced the government to look for potential monarch habitat in unconventional places.

As part of his national strategy to help pollinators, President Obama announced funding for a pollinator highway along the median of I-35, a north-south interstate traversing the busiest monarch migration route on the continent. Companies such as IVM Partners have also joined in the effort, focusing on restoring milkweed and natural prairie habitat in power line right of ways.

Highways and power lines may hardly seem like monarch sanctuaries, but a number of factors make these marginal habitats ideal for milkweed and monarchs. Medians and right of ways are relatively sunny and open habitats with low growth, making them ideal for pollinators. The linear nature of medians and wildlife corridors also helps to direct monarchs during their migrations, much like a real highway.

Since the main sponsor of milkweed restoration, the federal government, already owns the land found in most highway medians and power line right of ways, conservation funding can be used to purchase additional milkweed rather than land for planting. Medians and right of ways are also unlikely to be further developed, so any conversion to milkweed habitat should be long lasting.

The I-35 pollinator highway is currently being planted, and several power line right of ways across the country have already been converted into native prairie habitat teeming with milkweed. By creating habitat for monarchs, federal officials and conservationists also provide habitats for bees and other imperiled pollinators, as well as birds and other insects.

Whether fleeting or genuine, the recovery of migrating monarch populations is in the early stages. These tiny insects that traverse huge distances need all the help they can get along the way. Federally managed milkweed corridors are a start, but the vast majority of potential monarch habitat is privately owned. This is where you come in.

Take Home Message: Monarch butterfly populations have plummeted over the past two decades, but recent population gains have given conservationists hope. Efforts to expand valuable milkweed habitat have been partly responsible for the monarch's feeble recovery, and conservationists have increasingly relied upon highway medians and power line right of ways for creating new butterfly habitat. You can help migrating monarchs by planting native species of milkweed in your garden.