Frogs and the chytrid fungus – What is the best way to control wildlife diseases?

IN A WORLD increasingly characterized by globalization and rapid environmental change, the rise of emergent wildlife diseases has become a major threat to biodiversity.

While a fungus called white nose syndrome decimates bats across North America, a mysterious virus along the Pacific coast is turning starfish into mush.  From Australia, where a strain of contagious facial cancer plagues Tasmanian devils, to the Caribbean, where corals struggle to fight off a complex suite of infections, no geographic location or group of species is immune to the threat of wildlife disease.

But among wildlife diseases, the chytrid fungus known as Batrachochytrium dendrobatidis, or Bd for short, is the most severe.  The fungal disease, which affects frogs and salamanders, was first identified in 1998 following a series of mass amphibian die-offs in Australia. Since then, Bd has spread to six continents and contributed to the severe decline or extinction of at least 200 amphibian species.

The infectious chytrid fungus drove the Panamanian Golden Frog to extinction in the wild in 2007 after reaching Panama in 2006. Photo: Brian Gratwicke.

In terms of its overall threat to biodiversity, Bd has been called the worst infectious disease of all time. Nearly 6,000 amphibian species are susceptible to the fungus, which causes to skin infection in frogs and salamanders and impaires their ability to breathe. 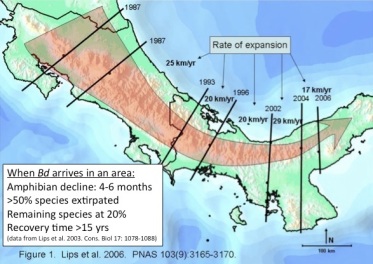 The chytrid fungus spread like a wave throughout Central America from 1987 to 2006. Within six months of Bd exposure, half of all amphibian species went locally extinct, while surviving species held on in greatly reduced numbers. Photo Credit: Karen Lips.

Faced with such a serious threat, scientists have struggled to pinpoint the best strategy for controlling Bd.

While many possible approaches exist for mitigating wildlife diseases, rapid and effective responses are often hampered by disease complexity, ethical challenges, and data gaps. As outbreaks evolve and circumstances change, conservationists must adapt their strategies to remain one step ahead of zoonotic pathogens.

A clear solution for safeguarding amphibians from Bd has yet to present itself. Five general strategies exist for controlling Bd, but they vary in cost, intensity, and realized benefits.

Understanding the pros and cons of each approach is important for selecting the best plan of attack for controlling the fungus, and for saving as many amphibian species as possible.

Photo: Save the frogs.

Pro: Some drugs have successfully cleared Bd infections in laboratory settings and, recently, even in wild frog populations.

Con: Vaccines are difficult to develop for poorly understood emergent diseases, and vaccinating large populations of wild frogs can be logistically challenging. Using drugs to control infections in natural ecosystems can be ecologically dangerous.

Disease epidemics in humans or domestic animals are often controlled using drugs or vaccines to immunize populations. For wild animals, achieving widespread vaccination is difficult but possible depending on the circumstances and disease characteristics.  To control the spread of rabies in the United States, scientists airdropped food pellets laced with the rabies vaccine over wide swaths of forest to vaccinate raccoons and other wild mammals.  Scientists have strategically created a vaccination zone by targeting rabies in the eastern United States and moving westward, a potentially useful strategy for combatting diseases like Bd that spread directionally along a front.  While no vaccine currently exists for Bd, drugs such as the anti-fungal itraconazole have been used to treat infections in captive and wild amphibians.

Pro: Reliance on probiotics and natural predators to control outbreaks can reduce the need for environmentally harmful chemicals. Biological controls have already been successfully used to suppress agricultural pests.

Con: Biological controls are not consistently effective compared to drugs or vaccines. Introducing bacteria or natural predators into an ecosystem at unnatural concentrations could also cause unknown ecological effects for lots of species.

Pro: This method can be used to target specific sites of ecological importance, and is often less ecologically disruptive than using chemicals or introduced bio-controls.

Con: Since repeated actions are needed to keep habitats disease free, the approach is often not sustainable for addressing widespread outbreaks. Repeatedly treating habitats can also be time consuming and expensive.

Bd is a pervasive disease, but the fungus doesn’t thrive under all conditions. Temperatures above 27 °C (81 °F) have been shown to suppress or kill Bd spores, which thrive at cooler temperatures. Researchers have found that sunnier, shallower streams often have a lower prevalence of Bd infection then cooler streams in shaded locations.   The fungus also relies on water to reproduce and exhibits lower prevalence in ephemeral ponds that dry up for part of the year. Periodically draining freshwater habitats or trimming back shading vegetation can suppress Bd in certain scenarios. While the strategy isn’t suitable for every habitat, it holds promise for isolated or shrinking amphibian populations in simple ecosystems that could be easily modified.

Pro: Captive frogs can be bred over generations to be more resistant to Bd infections, and can act as insurance in case wild populations go extinct. Removing animals from the wild can also help to reduce the transmission of density dependent diseases.

Con: Animals can become habituated to captivity, complicating reintroduction efforts. Selective breeding to alter the genetics of a species poses ethical issues, and the use of captive breeding is costly and limited in scale.

One of the most alarming attributes of Bd is the speed at which it decimates amphibian populations. Scientists documenting the spread of Bd in Central America noted a 50% drop in amphibian biodiversity within one year of Bd’s appearance, with certain species disappearing in a matter of months. Faced with such rapid population declines, scientists have scrambled to preserve relict populations of affected frogs. Some species, such as the Panamanian Golden Frog (Atelopus zeteki), have been driven to extinction in the wild, while others are critically endangered. Species that persist only in captivity are bred in the hopes of eventual reintroduction into the wild.

Con: This strategy doesn’t help the many amphibian populations that are already affected, and the scale of the epidemic makes it hard to limit the spread of Bd.

Epidemics and emergent diseases, affecting both people and animals, are a byproduct of a global society. Our massive network of trade and transit carries people, produce, and invasive species to previously isolated corners of the world, exposing populations to diseases for which they have no evolved immunity. Gravel roads, the exotic pet trade, and even the banana trade have been linked to the spread of Bd in different parts of the world. Bd has also been linked to habitats affected by environmental disturbances, indicating that ecosystems coping with human stressors are more susceptible to becoming wildlife disease reservoirs. Minimizing these human threats can go a long way towards controlling the spread of Bd and other wildlife diseases.

Conservationists scored a major victory against Bd in early 2016 by restricting the trade of salamanders. Other jurisdictions should follow suit by regulating the amphibian pet and scientific trades to account for the disease. Photo credit: Aliyah Robb.

Emergent wildlife diseases are often complex, poorly understood, and symptomatic of deeper environmental issues. For infected populations, there is rarely one quick fix.

While each approach to control Bd may have flaws, a combination of different methods tailored to the needs of specific populations may yield progress and help to contain the disease. Captive breeding, immunization, probiotics, and habitat treatments all have a role to play.

In addition to treating infected populations, behaviors and policies should be changed to minimize human threats to amphibians.

Controlling the spread of invasive species with tighter wildlife customs laws, minimizing human disturbances with protected areas, and monitoring amphibian populations to gauge the spread of Bd are all necessary steps to prevent further spread of the disease. Public education about the dangers of Bd is also key.

Frogs are not the only animals threatened by wildlife disease.  The troubling rise of emerging zoonotic epidemics threatens a diverse array of species around the world. Do your part to ensure that you don’t inadvertently spread Bd or other wildlife diseases by following these few simple guidelines.

Look for these labels when you shop.

Still want to do more to stop Bd?  Participate in the citizen science project FrogWatch, volunteer with organizations such as Save the Frogs that are working to stop Bd’s spread, and let others know how their actions affect amphibians around the world. 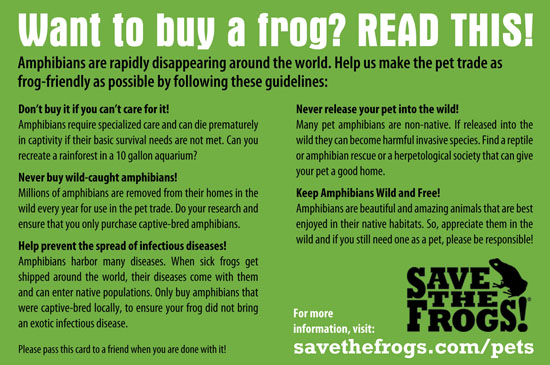 ← 9 conservation success stories made possible by flagship species
Rewildling Europe – Why wolves, bears, and other carnivores are making a comeback →

Take Home Message: The mechanisms behind emerging diseases are often poorly understood, and the path forward towards recovery is often unclear. Options to control such diseases, including vaccines, bioremediation, and captive breeding, are often constrained by cost, missing data, or logistical hurdles. To effectively address the amphibian epidemic caused by Bd as well as other wildlife disease outbreaks, conservationists need to employ a combination of strategies tailored to each case or site. Controlling habitat destruction and invasive species helps to prevent the spread of wildlife diseases and enhances a population’s potential for recovery.